About Whirinaki Whare Taonga » Our Team 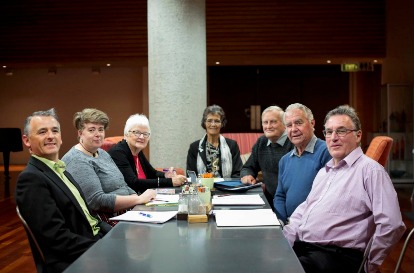 Peter Richardson retired as a lawyer in 2021 after over 40 years’ service to the Upper Hutt community. Peter brings a substantial background in governance, having chaired a diverse group of charities including a national service club, a national yachting regatta, drug rehabilitation for teenagers and many others. Peter is one of the original trustees of Whirinaki when it formed 20 years ago and has been Chair since 2013. He thoroughly enjoys being involved with Whirinaki, particularly the significant additions to the centre which he regards as a very tangible example of how Whirinaki is constantly evolving and growing.

Terry McCaul is currently Deputy Chief Executive and Chief Operating Officer of Stats NZ. He has held executive roles in telecommunications, financial services, science and technology, and central government, and has been a key advisor to some of New Zealand’s most senior executives through his private consulting business, Vitale Consulting Ltd. Terry has lived in Upper Hutt for over 40 years and has been a Trustee of Whirinaki Whare Taonga since 2014, bringing a wealth of business knowledge and support. Terry thoroughly enjoys Whirinaki’s range of offerings and has been particularly active in growing the use of the theatre with concerts such as the Queen’s Birthday Music Festival.

Zoe Juniper has lived in Upper Hutt with her family since immigrating to New Zealand in 2007.  Zoe is a talented crafter, working with wool fibres to make and promote wool fibre crafts in the Wellington region. As a member of the Upper Hutt Spinners and Weavers, Zoe is one of the organisers of the annual Capital FibreFest. Zoe works for the New Zealand Government as a professionally trained Emergency Manager and Geophysicist, with an MSc in Disaster, Risk & Resilience. Zoe brings a range of skills in governance, planning and risk management to support Whirinaki Whare Taonga.

Graeme served in the Army for 38 years until his retirement as Brigadier in 1997. He then became Chief Executive of the Transqual ITO, developing it over 10 years into an organisation responsible for national qualifications training. In 2007, he became Senior Associate for the business consultancy firm McDonnell Wellington Ltd until his final retirement in 2009. Graeme was a member of the Rotary Club of Heretaunga for 29 years and a trustee on the Board at Te Omanga Hospice for 10 years, including two years as Chair. Graeme is keen to give back to the community, bringing this valuable knowledge and experience to Whirinaki.

Angela brings marketing, communications, fundraising and strategy experience to the Board of Whirinaki. Angela was General Manager Communications, Marketing and Fundraising at New Zealand Red Cross, leading a team of 30, and is now contracting in communications and engagement with government agencies. Angela has been active in Upper Hutt musical and community theatre for over 20 years, an usher at Whirinaki for many years and has sat on a number of community committees. Angela values her role as a trustee, bringing together her love of the arts with her professional and community experience.

Owen brings strong management, strategic planning and financial knowledge to the Board of Whirinaki. Owen was Superintending Overseer of Building for New Zealand Post for over 25 years with a staff of 125 people and a capital works budget of over $20 million. He then moved to Telecom as Project Manager of capital works for 15 years. Owen’s community involvement in Upper Hutt is extensive including school boards, a member Heretaunga Rotary for over 30 years and a city councillor from 1995-1998. Owen very much enjoys being a trustee of Whirinaki, seeing it grow from small beginnings to a thriving centre of the arts for Upper Hutt and the wider region.

Martin is a fully qualified Chartered Accountant, with a broad range of experience in several accounting roles including public, commercial, manufacturing and service sectors. Martin’s experience working within a diverse range of organisations means he brings a detailed understanding of organisational management and governance to the Board of Whirinaki. Martin has lived in Upper Hutt for 15 years, enjoys a range of arts, music and heritage activities, and is passionate about the richness that Whirinaki Whare Taonga brings to Upper Hutt and beyond.

Hine Poa is Orongomai Marae’s representative on the Board of Whirinaki. Hine Poa is of Tūhoe and Ngāti Kahungunu descent and is part of the Kaumatua group at Orongamai Marae. Hine was a founding member of the renowned Kapa Haka group Māwai Hakona and has been institutional in teaching many children throughout the region in te reo and Kapa Haka. She was involved in the Māori Women’s Welfare League and Rimutaka Prison for many years and brings to Whirinaki support and advice in Tikanga Maori and Kaupapa Maori.

Barry Houston worked for 25 years as a Police Officer and retired as an Inspector.  He was then Executive Director of EAN NZ for 15 years, a Property Developer for 5 years and a Company Director. Barry was a Trentham Sports Centre Trustee, a Board member of the Upper Hutt Chamber of Commerce and held various roles with the YMCA, including Chair for 12 years. He now breeds alpacas and miniature Hummel Highland cattle. As an Advisory Trustee, Barry brings business strategy, operations and administration experience to the Trust.

Suzanne Beer is an art consultant with over 25 years’ experience in the art industry. She is the previous owner of Ngaio Fine Arts and has vast experience and knowledge of the Pumpkin Cottage Collection.  Suzanne and her father, Max Beer, bought the Lewis-Paape Gallery in Lower Hutt in the early 1980s, developing it into a reputable quality art gallery representing many of New Zealand’s best traditional and impressionist artists. They specialised in early investment work with clients throughout New Zealand. Suzanne supports Whirinaki with advice and assessment of gifts and bequests of artwork to the Pumpkin Cottage Collection.